Read my review of Generations Deluxe Megatron and Dreadwing.

So, I’m going to be brief.  Someone got the bright idea to make a Megatron toy to sell with Calvin Johnson’s signature shoes (his nickname is Megatron if you don’t know).  He’s a wide receiver (one of the best in the league) for the Detroit Lions (a team that is one of the worst in the league).  In any case, who cares?  The toy is what matters.

But first, the shoes.  The shoes were $120 if you were lucky enough to get them, and the toy came with them in its own box.  I tried to buy a pair, but they sold out in seconds online, and I decided it wasn’t worth the hassle or expense to try to track them down or spend hundreds online.  People were selling them for three of four hundred dollars.  At that price the shoes themselves should have transformed.  In the end, I decided to just buy the toy on ebay from someone who bought the shoes and had no interest in the toy. 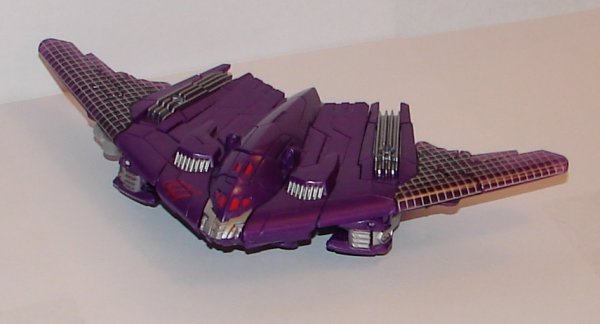 I really don’t see why Hasbro did this.  They would have been better off to just sell the toy online and then Transformers fans and Calvin Johnson fans could have bought the damn thing.  Instead, all they really did was make it possible for lots of people to buy the shoes and then get some of their money back by selling the toys.  The shoes would have sold anyway.  I just don’t get it, but then I am biased, since I just wanted the damn toys and I have an aversion to Hasbro making it difficult to get toys.  That is one of the things they are good at.

As to the toy itself, it’s not bad.  It’s a straight repaint in purple with Johnson’s signature tampoed on Megatron’s chest in red.  He also has a red “plus sign” pattern on his arms just like the shoes.  He comes with a little soft plastic football that you can see behind his left hand in the pictures above.  It does not plug into his hand, but fits over the plastic piece behind his hand.  The instructions do not show it, but that is really the only place it can go.  There is also a place under the fuselage to put it in vehicle mode. 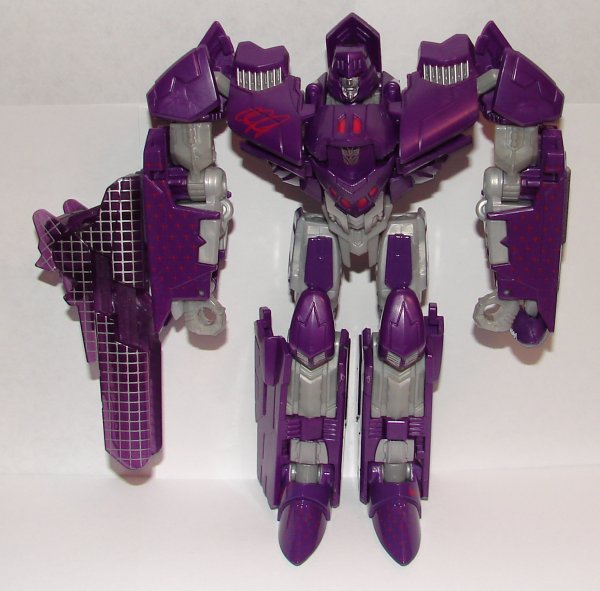 What annoys me about this toy is not the pain it was to get, or even the cost.  Mine was only $53, not bad for something that Hasbro made so damn difficult to get.  With a new head this toy should have been Galvatron (without the red).  It is unlikely they will do this mold in purple again, and for what?  To make a toy that a lot of people didn’t really want and was difficult to get for the people who did?  It just makes no sense to me.

I would have liked to have the shoes since they do have Decepticon logos on them, but it’s not a huge deal.  Some time down the road, maybe I can pick up a used pair in decent shape, but I’m not going to lose any sleep over it.

I’m 36 years old, and I work in network tech support for a public school system. I am a huge fan of Star Trek, Transformers, Harry Potter, and Marvel Comics as well as numerous other fandoms. I’m a big sports fan, especially the Boston Red Sox and the New England Patriots. I collect toys (mostly Transformers but other stuff too), comic books, and Red Sox baseball cards. I watch an obscene amount of television and love going to the movies. I am hopelessly addicted to Wizard Rock and I write Harry Potter Fanfiction, though these days I am working on a couple of different original YA novels.
View all posts by lmb3 →
This entry was posted in Toy Reviews, Toys, Transformers and tagged Calvin Johnson, Generations, Megatron, Nike, Toys, Transformers. Bookmark the permalink.