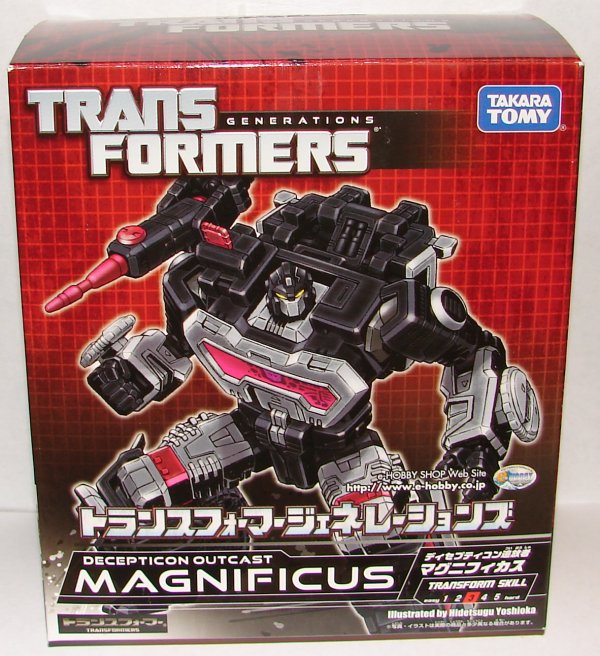 Vehicle Mode: Magnificus is a repainted Transformers 2010 Deluxe Perceptor with a new head.  He looks pretty sweet in black, red, and two shades of gray.  I love this vehicle mode with the treads in back.  It would look even better had they chromed his fenders and his bumpers.

Robot Mode: There is a lot that is really great about Magnificus’s robot mode.  The chrome around his chest and on his “knobs” looks great, and I like his shoulder weapon.  The head sculpt is fantastic and an homage to Perceptor’s G1 toy head.  I have always had a problem with this mold’s robot mode, as his shoulder’s don’t clip onto the sides of his chest, being only connected to his “backpack”.  If there is a way for his shoulders to connect, it’s not shown I his instructions.

While it’s a very cool repaint, one I would highly recommend, I would have much preferred they do G1 colored Perceptor with this head.  That toy would be ten times better and an absolute must.  I know this is an homage to the pre-Transformers use of the toy in the Microman line that would later become Perceptor.  While it is a really cool looking toy, it just doesn’t do anything for me as a Pre-TF homage like the homages to G1 cars do.

I’m 36 years old, and I work in network tech support for a public school system. I am a huge fan of Star Trek, Transformers, Harry Potter, and Marvel Comics as well as numerous other fandoms. I’m a big sports fan, especially the Boston Red Sox and the New England Patriots. I collect toys (mostly Transformers but other stuff too), comic books, and Red Sox baseball cards. I watch an obscene amount of television and love going to the movies. I am hopelessly addicted to Wizard Rock and I write Harry Potter Fanfiction, though these days I am working on a couple of different original YA novels.
View all posts by lmb3 →
This entry was posted in Toy Reviews, Toys, Transformers and tagged eHobby, Generations, Magnificus, Perceptor, Toys, Transformers, Transformers 2010, Transformers Generations. Bookmark the permalink.