I can’t find a lot of info on these, so take all this with a grain of salt as I’m guessing a lot.

Back in 1984 Proctor and Gamble offered these Transformers cups as a promotional item with the purchase of some of there products.  One cup has Optimus Prime and Sunstreaker on it and the other has Megatron and Starscream.

One cup was received with either “One Bounce 40-Use” or “4 Bars of Coast Bath Size”.  When I first decided to write this blog, I assumed that “Bounce 40-Use” referred to dryer sheets.  However, as I think about it, if it was dryer sheets, I would think it would say “40-Count” or something like that.  “40-Use” makes me think it was liquid fabric softener.

I’m not certain if these were an in store promotion or mail order.  With the products you need to purchase printed on the side of the cup, it makes me think they were available in store.

Unlike a lot of Transformers items from the 1980’s, these cups seem pretty cheap and can be found on ebay with a little patience.  I wouldn’t pay more than a few couple bucks for each of them. 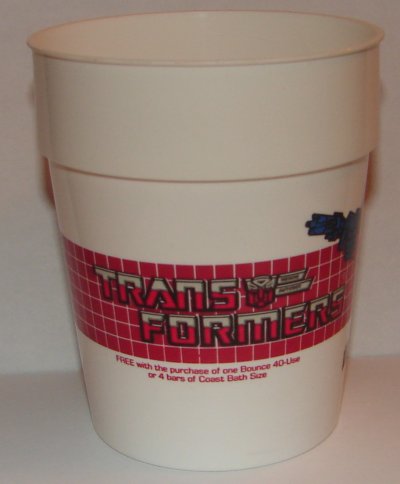 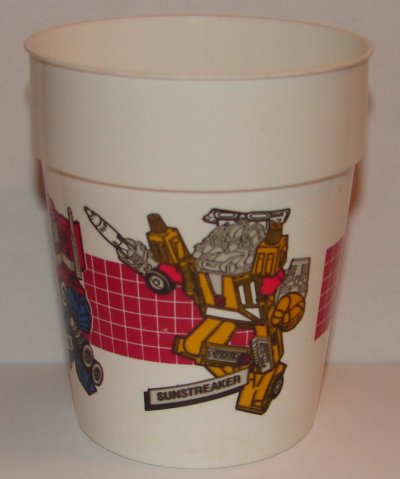 I’m 36 years old, and I work in network tech support for a public school system. I am a huge fan of Star Trek, Transformers, Harry Potter, and Marvel Comics as well as numerous other fandoms. I’m a big sports fan, especially the Boston Red Sox and the New England Patriots. I collect toys (mostly Transformers but other stuff too), comic books, and Red Sox baseball cards. I watch an obscene amount of television and love going to the movies. I am hopelessly addicted to Wizard Rock and I write Harry Potter Fanfiction, though these days I am working on a couple of different original YA novels.
View all posts by lmb3 →
This entry was posted in Toys, Transformers, Transformers Artifact of the Week and tagged Bounce Fabric Softener, Coast Soap, Cups, Megatron, Optimus Prime, Starscream, Sunstreaker, Toys, Transformers. Bookmark the permalink.