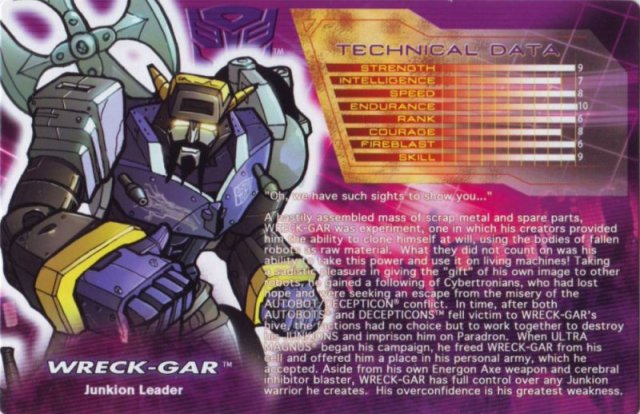 Name Origin: Wreck-Gar was originally a G1 movie character and the name was reused for the Generations toy based on him.  Junkheap is the name of the Generations toy that was repainted with a new head from Wreck-Gar.  Scrap Iron has a bit of a multiple personality disorder going on.  The signs at Botcon list his name as Scrapheap, which is the name of the Japanese exclusive that uses his head with the Wreck-Gar body, but his Tech Spec lists him as Scrap Iron.  I’ve only heard him called Scrap Iron, so it seems the sign was a simple mistake on the sign.  You can see a picture of the sign below. 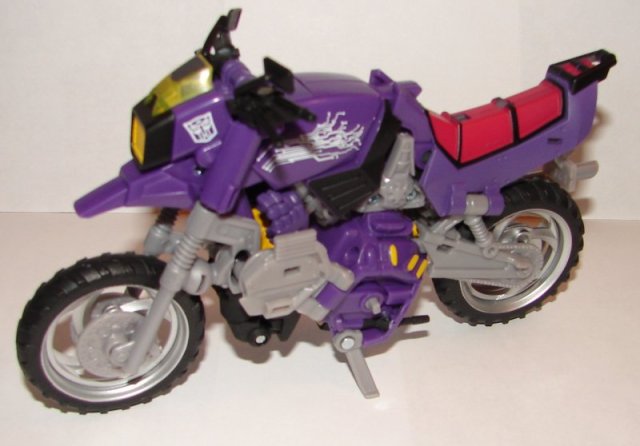 Since they are from the Shattered Glass universe, the Junkions are done in Insecticon colors, which look awesome.  I’m not a huge fan of the mold, I can’t really get him to stand up straight as one leg seems longer than the other (might just be I missed something during transformation) but they do look great.  The three toys are identical accept for the heads.  These are some of the best of the Botcon 2012 toys, though at $99 for the set of three, it was overpriced in my opinion for.  That’s $33 each for deluxe toys that had no new molding.  That’s overpriced.

I’m 36 years old, and I work in network tech support for a public school system. I am a huge fan of Star Trek, Transformers, Harry Potter, and Marvel Comics as well as numerous other fandoms. I’m a big sports fan, especially the Boston Red Sox and the New England Patriots. I collect toys (mostly Transformers but other stuff too), comic books, and Red Sox baseball cards. I watch an obscene amount of television and love going to the movies. I am hopelessly addicted to Wizard Rock and I write Harry Potter Fanfiction, though these days I am working on a couple of different original YA novels.
View all posts by lmb3 →
This entry was posted in Toy Reviews, Toys, Transformers and tagged Botcon, Botcon 2012, Junkheap, Junkions, Scrap Iron, Shattered Glass, Toys, Transformers, Wreck-Gar. Bookmark the permalink.